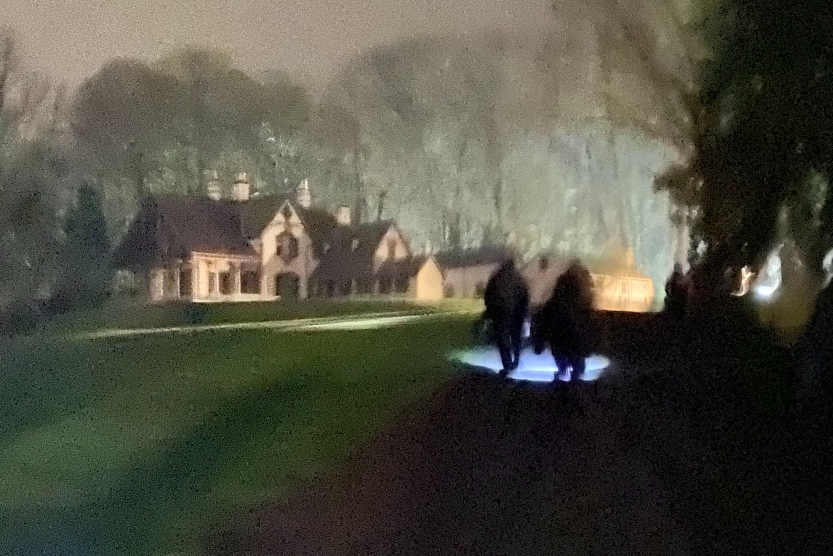 One half of the RR Team took a trusty accomplice and joined the Specter Seeker folks of Northern NJ to investigate an old and stately manse with a reputation for ghosts; Fosterfields Living Historical Farm in Morris County.

This place was home to the descendants of Paul Revere in the 1850’s and then the Foster Family lived there until the last remaining family member, Caroline Foster, died at age 102 in 1979. It originated, like so many great Jersey haunts, as a farm house in 1774 “on route to a tavern”.

It was a cold and blustery night for your humble investigator and her young adept and yet we kept on keeping on as, according to Lead Investigator Frank of the Specter Seekers, the farm was active and their group had gotten many hits in past investigations on unusual electromagnetic activity.

Frannie, are you OK? Are you OK, Frannie?

We took many pics and visited four active hotspots on the acreage where meters, laser grids and cameras were set up to capture any of the action. While there was the occasional odd EMF meter reading during the first hour, it wasn’t until near the end of our investigation when I took up a kind offer to use copper divining rods that something really strange began to happen.

While holding the copper rods out straight in front of me, the EMF meter a few feet away on a table started to ping and light up (indicating activity) and then the flashlight in front of me, on its side on the table, started to slowly roll a few inches and then flickered on and off.
I asked “If anyone is here, hello! Please make the rods cross if you can hear me”…and lo and behold the rods swung inward and crossed. Our small crowd of investigators began to get very excited and everyone started telling me what to say next. I took a recommendation from the crowd and then asked “Hello, thank you for doing this, can you now please make the rods move and have one tap my shoulder, if you can hear me?” [I am VERY polite to ghosts] and sure enough, my right-handed rod began steadily swinging right and went in a half-circle and tapped my shoulder. I felt the rod actually pull and move against my shoulder, while I stood stock still and did not even turn my head. I could feel the rod tapping my shoulder and could sort of see it in my peripheral vision. The crowd was really getting into it then. I also began to shake a bit and started feeling uneasy, so I said “Thank you so much, it’s OK, I’m so glad and thank you but I will stop now” and I put the rods down.

I was feeling chilled and everyone seemed to be shocked and rather scared at this point. Our Specter Society guides let us know that it was a good time to end and so, we wrapped up and headed back to our car. Again, I was feeling cold and a little shook from this experience.

It was later when we reviewed our pics that I was chilled yet again. In the pictures below of one of the cottages that Caroline, the last Foster Family descendant, spent so much time in, has an unexplainable image in the window that appeared in one of my duplicate shots:

So the Specter Seeker guides asked everyone in attendance to be sure and review any pics after the investigation and to let them know if anything is visible. I will be reaching out to them shortly with this.
If anyone has any thoughts on this, please let me know. I will post more pics of Fosterfields and also the larger, uncropped cottage grid pics shown above, below.